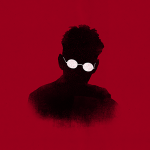 Beckett 19: or some such semblance
Directed by Gerald Vanderwoude

Gone too soon! Yesterday was the closing night of UBC Theatre and Film’s production of Beckett 19: or some such semblance by Samuel Beckett. This year’s Beckett production was short but very sweet with incredibly versatile performances, evocative technical design, and much appreciated humor.

Opening with a radical drum solo by Tony Koelwyn under a multicoloured spotlight Beckett 19 captured our attention right from the top. The sparse but deliberate set and lighting design created the unique character of Mouth from Samuel Becketts’ short monologue Not I. Beverly Bardal delivered this biting and breathless piece about a nearly mute woman finally exposing the trauma of her youth and the buzzing voice in her head with impressive feeling and impact. A raptured audience was then briskly transitioned into a comedic series featuring light bulbs, a hat and a squashed cream horn. This light-hearted but thoughtful comedy came with performances from Joe Procyk, Norman Young, Chris Humphreys and Cam Cronin. Another short piece written by Beckett, Biddies in the Boat, finished off the first half of the show with Beverly Bardal, Deb Pickman and a gigantic moon challenging the audience to an evening conversation in the departments famous row boat.

After a brief intermission Beckett 19 concluded with a final piece – Act Without Words by Beckett. A darkly comedic piece centred on physicality and an animated desert island rounded out the performances and brought together an amazing night of talent, humor, and contemplation. Truly hypnotic the technical design of this series stood out with their stark contrast lighting and minimal but effective use of set, props and sound. Congratulations to everyone who made this set of performances into such an enchanting evening – the UBC Players Club is looking forward to the rest of the UBC Theatre and Film’s 2019/20 season!